Noncommissioned officers are expected to teach military customs, courtesies, and traditions, yet what do you do when customs and traditions either are non-standardized or are still emerging? I mean how can something be a tradition to share and hand down when it is only just now becoming mainstream? Today the Change of Responsibility Ceremony is one of those challenged traditions and it seems everyone is “rolling their own” ceremony. If you think about it, we did not even have E-9s until about 1960 and the command sergeant major program did not exist until 1968, the Army had regulations explaining what needs to be done when a Commander departs but little to nothing about when the senior NCO leaves, and that’s the way it’s always been done. It’s only been in the last 10-15 years or so that we have seen units conducting Change of Responsibility (COR) ceremonies.

The only place you can find the Change of Responsibility ceremony between an outgoing and incoming senior enlisted advisor attempted to be described in any formal Army doctrinal manual is in Appendix C of FM 7-21.13, The Soldiers Guide. My connection to this was while I was assisting the Sergeants Major Academy to update FM 7-22.7, The NCO Guide, was when the contractor wanted my okay to use my NCO Induction Ceremony for Appendix F. At the time the Induction Ceremony was (and still pretty much is) another non-standard and emerging Army tradition, I had written a sample how-to guide a few years earlier and they wanted to use it for the manual. After I gave my approval I told them that they also need to fix was the lack of a ceremony for the COR. He explained it was too late for the NCO Guide since it was already written and they were getting my approval afterwards, but he did tell me that they would address it in the Soldier Guide.

So, according to Topsarge (me) the COR ceremony was published alright, but the “names were changed to protect the innocent.” Ahead of it in the FM is the Change of Command ceremony, a well established and historical ceremony steeped in tradition. The COR as written looks and smells a lot like that, and it appears to me that some people ain’t happy NCOs are bastardizing the Change of Command. Forming the troops, handing out the flowers and bringing flags or guidons forward are all pretty standard, but what I want to focus on in this discussion is exactly what happens when the incoming and outgoing are eye-to-eye with the commander, and something I suggest that we need to relook and solve. Some think it should be a box formation and just shuffling who stands where like the change of command. Others think it is the exchange of the Model 1840 NCO Sword that signifies the change, and the US Army Sergeants Major Academy resurrected the halberd, advocating units use that as a symbol of NCO authority and include it in CORs.

The incoming senior enlisted leader is often the victim of the outgoings whims as their predecessor usually is managing the details, along with the staff. Usually an incoming shows up a day before the ceremony, if they are lucky they get to take part in a rehearsal or two, but they are basically being told where to stand and what to do. So if they are passing flags, swords or halberds it is usually what the last guy or gal did.

The Army is a standards-based organization and when it comes to ceremonies we are usually pretty meticulous and detailed. We hold IPRs and plan out every detail, conduct rehearsals, brief back the boss. But the COR ceremony continues to be the step-child of Army ceremonies as no one seems to be and advocate for it. The Infantry Center is the proponent for TC 3-21.5: Drill and Ceremonies (formerly FM 22-5), but I don’t think they are worried too much about it. But as I attend and see pictures of change of responsibilities I continue to see everything under the sun, and they are all unique and different and there is little standardization. Just a look at a few of the photographs in this post you can easily see the variety, and the recognition that none of them are technically wrong. 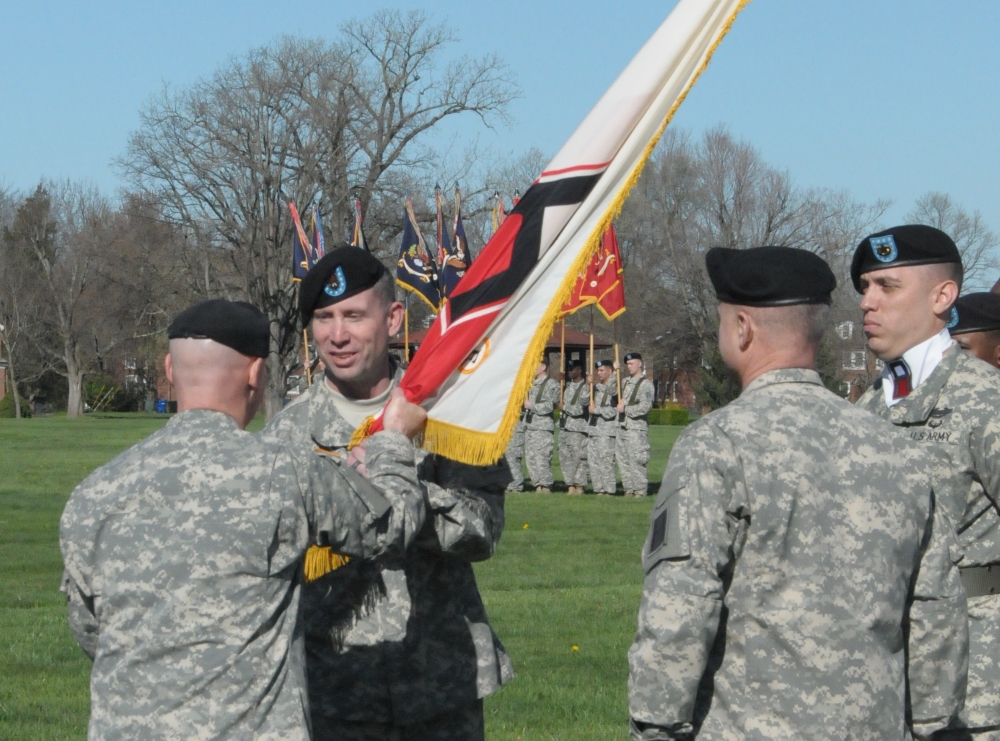 The Command Sergeant Major is the keeper of the colors, and the honor of serving as the “color sergeant” belongs to the unit’s senior enlisted member as the “keeper of the colors.” That tradition is an inherent tradition that is well known and understood by one and all. This traces its roots to the position of Color Sergeant, the individual who on the battlefield directed the movements of a unit. The color sergeant was last seen in the US military in WWI, and they even had their own rank insignia. As such the colors are entrusted to the command sergeant major, we inherently know that, but when you use a sword there is no symbolic gesture that demonstrates it, so when does that happen? Is it at their first meeting, at the COs house, or does the commander send an email to him at the office? No, the change of responsibility is the proper time and place to relinquish the responsibility for the care of the colors, and transfer to the incoming.

COR is about the unit, not the people who fill those positions. This is an important milestone in the unit’s history and soldiers deserve to know when their senior enlisted leaders come and go, not only know about it because a new sign is up or a chain of command photo has been swapped. Let’s get the COR written in the Training Circular and let’s have a doctrinal process that standardizes the way we mark that transition and not force leaders to guess what right looks like.

31 thoughts on “What’s wrong with the Change of Responsibility Ceremony?”