Increased pay is vital to recruiting and troop retention 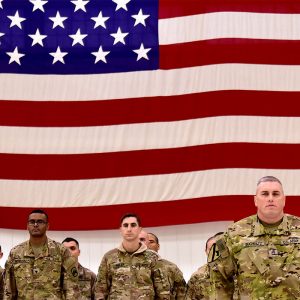 Employee retention is hard for any company. When even Forbes 500 companies spend time brainstorming ways to keep their best and brightest, it’s no surprise that the military could stand to do the same sort of soul-searching.

Retaining military service members has its own brand of unique challenges, but, when it happens, is proven to strengthen the force and its overall readiness. Therefore, it’s important to find and support options that keep quality soldiers, sailors and airmen serving.

Congress—after what many critics say is years of neglect—has finally stepped up to fund the issue. Last month it sent the Fiscal 2018 National Defense Authorization Act to President Donald Trump, which, among other things, increases military pay by historic levels. This 2.4-percent pay hike is greatly needed to not only retain quality service members but also meet the bill’s call to grow troop levels by 20,000. The bulk of that increase will go into the Army and Army Reserves.

For young people with no more than a high school education, joining the military should be a competitive well paying option in a respectable industry. Once sworn in, the military has to continue to entice people to stay through their changing stages of life with benefits that encourage personal growth and satisfaction—whether that’s through professional development, supporting families or providing a living wage that improves, not hinders, quality of life.

While serving their country, no service member should struggle to feed their family, take advantage of time off with a trip to the movies, or be forced to make tough decisions between paying a car note or getting their children involved in activities in the community. When service members are confident in their finances it bleeds over into the communities surrounding military bases and creates a positive domino effect on local businesses and restaurants.

Higher paychecks will keep the military competitive with what the private sector pays and also help counter-balance some of the aspects of military life that can begin to weigh on folks over time—constant moving, time away from loved ones and the ever-looming threat of war in various places across the globe.

“Over the last several years, we have seen an increase in threats and a decrease in funding for our military,” Rep. Mac Thornberry, chairman of the House Committee on Armed Services, said in a statement. “This year’s NDAA begins to rebuild our military and to ensure we can defend the American people.”

Veterans are highly sought after in the private sector, so it’s no wonder they are often lured from the service with bigger paychecks, the ability to live in one place and the idea of not arriving for PT at 6:30 every morning. A sense of duty to country only goes so far. It’s good of Congress to acknowledge these real-world challenges and take action.

While the pay may be what most service members gravitate toward in news about the 2018 NDAA, it also carries other benefits to improve military quality of life, according to an article at Military.com. It allows for military spouses who need a state license for employment to apply for a $500 rebate after a PCS move (a struggle for teachers, hairstylists, nurses, lawyers, and so many other professions). It also eases the restrictions on PCS moves to allow families to move before or after the service member to accommodate for jobs, school or other approved obligations that can complicate a move.

Even though the bill was passed without the support of Democrats, they have in the past discussed the need for a military pay raise. Bi-partisan support on this issue is vital as budget talks kick off in the House and Senate.

Should Congress not lift the spending caps set in place by the Budget Control Act of 2011, much of the spending in this NDAA can’t happen. Reuters reported there is no clear plan from Congress on how to provide more money for the Pentagon.