Skip to content
Search
Home > Army > Thank You For Your Service: Respecting Those In Uniform, And The Entire Organization They Represent 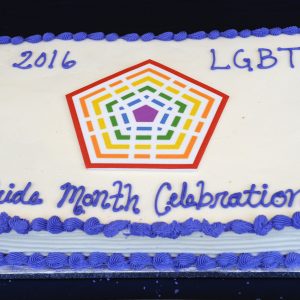 DOD LGBT Pride Month event celebration cake. The celebration was held on the Pentagon Courtyard, June 8, 2016. The event is an opportunity for the entire DOD community to come together and celebrate the great diversity of the American people in a festive, affirming atmosphere. President Barack Obama signed a proclamation, May 31, 2016, designating June as Lesbian, Gay, Bisexual and Transgender Pride Month. On Sept. 20, 2011, the “don’t ask, don’t tell” repeal went into full implementation, allowing lesbian, gay and bisexual service members to serve openly in the U.S armed forces. (Photo Credit: Marv Lynchard)

Thank You For Your Service

Every service member has experienced it. Whether in an airport, a grocery store or while visiting friends or family, at some point or another they are thanked for their service. Even while watching football on Sunday or attending community events, service members are likely to find themselves being thanked in that blanket overall sort of way.

The personal thank yous are almost always an awkward exchange as the majority of soldiers, sailors, Marines or airmen don’t enlist for the perk of being stopped by strangers while pumping gas or getting coffee. Many of us, just nod and express some form of appreciation for this acknowledgment. It’s nice to know that you’re in a highly respected line of work, but it can raise larger questions in my mind.

“Thank you for your service.” Do people mean my service specifically or that of the organization as a whole?

Would this person thank me if I were a Sikh wearing an Army issued turban instead of patrol cap? Would they say thank you to an airman who’s “foreign-sounding” name is too long for the standard nametape? Or perhaps if my head cover was a yarmulke? What if I was a woman or maybe traveling with a same-sex spouse—would they look the other way?

Or when folks take to social media to post patriotic messages featuring service members, do they really mean they thank all aspects of the military? Are they thankful that a gay soldier can now serve openly and bring their spouse to live on post? Or that a sailor can undergo gender transition while continuing to serve in the Navy? Or that a Venezuelan immigrant can join the Marines as a path to American citizenship?

It’s hard to say. But I believe that to thank the service member and show them respect, you, too, are thanking the organization they represent and all its values.

In a world that is increasingly separating into segments, fearing the unknown and fighting against another’s rights because of their race, religion or sexual orientation, it’s important to remember that America’s military is an equal-opportunity melting pot for all walks of life.

It was President Harry S. Truman who issued the executive order on July 26, 1948, that abolished racial discrimination in the United States Armed Forces and eventually led to the end of segregation in the services. Of course, this wasn’t a perfect or smooth transition, but it came a staggering 16 years before President Lyndon Baines Johnson signed the Civil Rights Act of 1964, which banned employment discrimination and segregation in public places.

In 2010, President Barack Obama repealed Don’t Ask, Don’t Tell, the law that banned gay or lesbian Americans from serving in the military. Five years later the Supreme Court ruled same-sex couples have the same right to marry as heterosexual couples.

It seems that over time the military has become a sort of social experiment for what is to come for our country. Of course, it hasn’t always gotten things right or perfect. Women are just now entering into combat jobs that have long been kept from them, and transgender people’s service is now allowed, but continually up for debate.

Nearly every month, the Army takes time to celebrate the many communities and heritages that come together to make up its fighting force. These educational, enlightening and morale-boosting events inspire camaraderie and conversations that are greatly needed. Great stories come from these commemorations and are available for anyone interested to read and learn about today’s troops.

So the people that thank service members for raising their right hand, do they truly respect the entire organization and the equality it stands for? I hope so. I hope those thankful in our nation take time to appreciate every one of those service members, regardless of how different they may be.

The colorblind and gender-neutral act of thanking a soldier regardless of the station in life is almost universal across our nation. Perhaps by remembering that desegregating our military helped later desegregate our nation, we can respect and learn from the military’s continued mission of offering equal opportunities for all Americans to serve this great nation.

It’s something to think about next time you say, “Thank you for your service.”