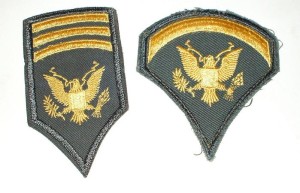 I was recently browsing through a 1-year old topic that is trending again on a military forum that I belong to where a member posted the oft asked (and usually not researched by the OP) question “Why doesn’t the Army bring back the ranks of specialist again?” Like they often do the writer emphasizes the divergence of technical versus leadership, and reminds us that not everyone is “cut out to be a leader” but can still contribute as a specialist and should have a chance for upward mobility. I mostly chuckle and wonder if they ever heard of our great Warrant Officer corps?

First off, and to clear a misconception, there was never a Spec-8 or Spec-9 in the Army. Got it? The rank existed, but according the the DCSPER, (now HRC) no one was ever promoted to those grades before they were discontinued. I wrote a short monograph on the history of Specialist rank (link), you may want to give it a read if you have a real interest in the storied past of technicians and specialists. Then the Spec-7 rank was abolished in 1978 and except for the SPC, the specialists ranks of SP5 and SP6 were finally killed off in 1985, and for good reason. Though it is not specifically the why for, it is helpful to understand that unfortunately most personnel decisions and actions, especially relating to selection and promotion, are done for the “good of the Army.” Sadly that means policy is driven primarily by end-strength and/or budget decrees. That is how the Army manages ranks at each level. Not enough SGTs, mess with the promotion process. Too many SFCs, change RCP and institute QSP. Too many Sergeants Majors, decrease MTOE/TDA slots available for MSGs to compete for. One need only listen to our military leaders who fight for resources to watch their predicted results become a new personnel policy and sometimes history has shown us that decisions made were not always because they were best for the Army, it was what they could afford.

The Army had a two-tiered enlisted NCO-Specialist rank system from Jul 1955 to basically Oct 1985 (actually, to present day), and it was  thirty years of confusion. The problem still exists at the E-4 pay grade (how many corporals do you know?). The military branches went thru the creation of the “Super grades” (E-8 and E-9) and this “two party system” of the haves and have-nots in 1958 added to the problem, and career and mid-grade combat soldiers were asking their leaders ‘WTF, my risks outweigh theirs and they get the same pay and perks as me?’ One way the Army addressed some of this disparity between NCO leaders and specialist technicians was through something called “Pro Pay,” a monetary incentive for those performing specific functions and a soldier had to go through a exam to earn it. Soldiers who passed something called a Military Occupational Specialty (MOS) tests at a certain level would received extra money in their check for “Proficiency Pay,” but alas it was phased out when the Army went to skills qualification testing (SQT).

It was thought at one time that because of “technology” we needed separate enlisted grade tracks. Heck early in the thinking of leaders of a changing Army there was a belief that NCOs wouldn’t be able to command an Abrams M1 tank because it would be too complicated. One has to remember the Army of the 1960s and 1970s and the people who served, we were in the process of rebuilding the Army and the NCO Corps itself. Specialists, regardless of their grade, were outranked by all noncommissioned officers from Corporal through to Sergeant Major. When used as part of the earlier Technical grades they were considered a “half-step” grade, that is ranking below hard-stripe NCOs of the same grade, but higher than the next lower grade. It was due to that, and the lack of authority, that differentiated the modern specialist ranks from the rank of a noncommissioned officer. But in the pay line the Spec. 6 received the same amount as the S.Sgt, unless there was a pro pay kicker.

The number one reason the two tracks didn’t work was because it sapped the morale of the men on the line. The Army is mostly (I qualified this and said mostly) run/led by leaders from the combat arms communities and the grumbling of soldiers in the trenches, on tanks and on the big guns and aircraft often griped about the Specialist’s perks versus their own…it was always a point of contention. Hard-stripe NCOs did have special privileges, but they were few and far between by 1984. When was the last time you saw an NCO Club, or a special mess area for the noncom at the unit DFAC? Plus, from ’58 to ’68 the super grade rank grade additions had fouled up the enlisted ranks because they let men wear the insignia of  their former grade and had sergeants first class in pay grade E-6 and E-7. Yes, really, it was messy and the Army made a few missteps trying to fix it. The fact was the ranks, responsibilities, duties and authority of the Specialist was a mere asterisk on the bigger problems going on with the enlisted force during, and the period immediately following, the Vietnam War.

Though this is purely a tongue-in-cheek look at the Army Specialist is in the The Creed of the Specialist, it humorously portrays the specialists as one of mediocrity. Plus there were those annoyances that all soldiers have to deal with that specialists were exempt from, things like leading “fatigue details,” like pulling guard duty, or tasks like CQ and Staff Duty.  A large number of specialist-technicians resided in the Women’s Army Corps which wasn’t dissolved until 1978 when women were integrated in to the Army. Interesting that 1978 is the same year that the Spec.-7 rank disappeared, I have no historical context from my research which describes the specifics for removing the SP7, but according to published report of the time Spec-6 and Spec-5 were eliminated based on the requests of the branches that had specialists ranks.

DA Message R-281450Z May 1985 stated that as a result of MACOM Commanders review of the Specialists ranks 5 and 6 that the Chief of Staff of the Army decided to eliminate them, in the prior year the Army 29,000 overages and shortages in grades E-5 to E-9 and they were hard at work trying to re-balance enlisted structure (see my above comment about policy decisions). But those problems track back to 1974 just a few short months after the end of major hostilities in Vietnam where the Army was short 65,000 personnel in the same top five enlisted ranks (E-5 to E-9).

Today, and it happens in public every few years, some hooah innocently asks “hey, why don’t we bring back career specialists?” It usually seems to crop up when some good human being who is a whiz at their job is about to be DX’d for some up-or-out policy like refusing to go to the board, eating themselves in to a date with the 1SGs measuring tape, or failing to meet a standard like APFT or a WLC requirements. The individual is probably a great PFC or SPC, but everyone around them knows they should not really advance to the ranks of the Noncom but don’t want to have to see them go. Often time the one with the idea claim that “certain” career fields should get special considerations without really doing any research or having the historical understanding of the turmoil it caused. In my time it was often admin-log; clerks, cooks, mechanics, truck drivers, commo and supply folks, today the MOS’s du jour are UAV and Cyber soldiers, or fill in the blanks of your favorite cause.

I was a multi-functional logistician back in ancient history, I spent many a day in the motor pools, supply rooms, Dfacs and in convoys. I served as SL, PSG, a Drill Sgt, an NCOES instructor at ALC (it was BNCOC then), was a 1SG a couple of times and had career broadening assignments for 11-years as a Cmd Sgt Maj. But I also was an ASE-certified mechanic in multiple auto and truck categories, a recovery vehicle operator, led the department at Ft Knox that taught complex wiring for the Bradley turret system for SSG 63T/91M and ran a number of maintenance shops as a motor sergeant. I was a technician, a leader, and a soldier and I am not any better than the soldier-technicians of today and I can easily point out a number of my fellow technician-soldiers today who have been successful…the cream rises to the top. I submit good is good, and good soldiers can and should be both and that if you ask then they will likely tell you that they don’t want a “special” rank other than the stripes of a sergeant. It is about leaders informing soldiers of the expectations and then setting the example and by doing. The one constant in the Army is change, it is the ability to listen to the changing nature and be out ahead of that change that will make one successful.

I suggest in today’s shrinking Army you cannot afford to sub-divide the ranks again and we are talking about a different caliber of soldier today then back in 1955 or 1965, and 1975. This isn’t 1975 anymore people, we can have noncommissioned officers who are technical and are good leaders. I read in the discussion in question by a level-headed leader who stated that if soldier joins and see’s the lifestyle and chooses to re-enlist or make a career out of the Army, they must grow and mature in their profession and development “tactically and technically” as the NCO Creeds reminds us. And if they cannot do that we should thank them and help them transition out of the military. That is probably the best solution, but tit brings my conversation around to the beginning. None of these matter if doomsday scenarios come to life and Army end strength tanks and we break the all volunteer force and cannot recruit highly technical skills at the appropriate levels, the Specialist program is there to grab off the shelf and be dusted off and re-instated because almost all “human capital” policies tie to budgets and end-strength.

11 thoughts on “Bring back the Specialist Rank?”