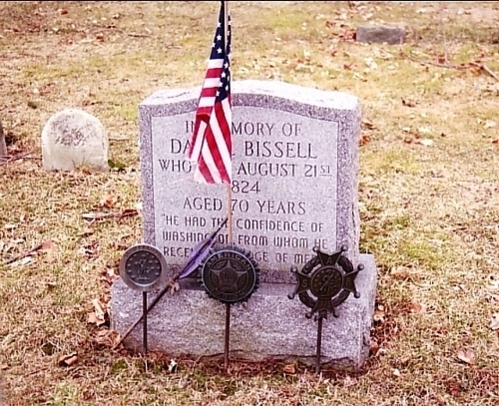 Daniel Bissell, the eldest son of Daniel and Elizabeth Bissell of Windsor, Connecticut, was born December 30, 1754. When the Revolution began he enlisted in the 5th Connecticut Regiment of the Continental Line, where his “sterling qualities of head and heart speedily gained the esteem of his comrades and the confidence of his officers.” He became a sergeant on September 1, 1777 and served through the war with credit and was present at the battle of White Plains, and also at Trenton and Monmouth, the latter where he was wounded in the cheek. In 1781 Bissell was directed to New York by Regimental Commander Col. Heman Swift to pose as a deserter and gather vital information, and sent him to Col. David Humphrey for instructions. Upon his arrival in New York on August 13th, he learned that British General Henry Clinton had ordered that deserters would not be protected, so he joined Benedict Arnold’s Loyalist Army with the intent on gathering data on the troop strength and the state of enemy forces. He became ill and was not able to return to his Regiment, so he served as a quartermaster sergeant until 13 months later in September 1782 when he was finally able to escape.

Upon his return Bissell spent two days writing down the information he gathered. He was informed that Swift could not reward him with a commission as he intended, as Congress had directed no more commissions be given. Bissell noted he was asked: “if I wished to be discharged from service. I told the Col. [Humphrey] I had been in every campaign of the War (and out of health) that my wish was to continue through. I was then asked to join the Invalid Corps and receive a pension. This I declined on the ground, that my Country was poor and it would be of no advantage to me. He said I might do duty or not as I pleased. I went to my Regiment and did orderly sergeant duty until May following, when I obtained permission from his Excellency to go to Susquehannah [sic] And on my return to the regiment I found the last division of the army had been furloughed the day before; my clothes, which I left in the regiment, were all stolen. I found there had been a General Order for me to attend at Head Quarters and receive an honorary certificate and a badge of military merit.”

On June 8, 1783, at Washington’s headquarters in Newburgh, NY, one month after the first two awards were presented, Sergeant Bissell was noted for his service by being presenting only the third Badge for Military Merit by Jonathan Trumbull Jr., Washington’s military secretary. The citation read: Whereas it hath ever been an established maxim in the American Service, that the Road to Glory was open to all, that Honorary Rewards and Distinctions, were the greatest Stimuli to virtuous actions, and whereas Sergeant DANIEL BISSELL of the Second Connecticut Regiment, has performed some important service, within the immediate knowledge of the Commander-in-Chief, in which his fidelity, perseverance and good sense, were not only conspicuously manifested, but his general line of conduct throughout  a long course of service, having been not only unspotted but highly deserving of commendation. Now, therefore, Know Ye, that the aforesaid Sergeant BISSELL, hath fully and truly deserved, and hath been properly invested with, the Honorary Badge of Military Merit, and is entitled to pass and repass all Guards and Military Posts, as freely and as amply any Commissioned Office whatever; and is further recommended to that Notice which a Brave and Faithful Soldier deserves from his Countrymen.

The badge was to be used to recognize distinct honor, as indicated August 7, 1782, when Washington issued the following general order: “The General, ever desirous to cherish a virtuous ambition in his soldiers, as well as to foster and encourage every species of Military merit, directs that whenever any singularly meritorious action is performed, the author of it shall be permitted to wear on his facings, over his left breast, the figure of a heart in purple cloth, edged with a narrow lace or binding. Not only instances of unusual gallantry, but also of extraordinary fidelity and essential service in any way shall meet with due reward.”

Bissell ended the war with the 2nd Connecticut Regiment, and afterwards served as Paymaster and went on to participate in a campaign against the Indians. Bissell was commissioned a First Lieutenant in the 16th Infantry Regiment in 1799 during the Quasi War with France, and was discharged on June 15, 1800. Bissell had married Theda Hulbert in 1789, and in 1810 they moved to Richmond, New York. In 1813 Bissell’s Badge and the accompanying citation, which he kept with care in the family bible, were lost in a house fire. He died August 21, 1824 in Richmond, New York, and is buried in Allens Hill Cemetery.