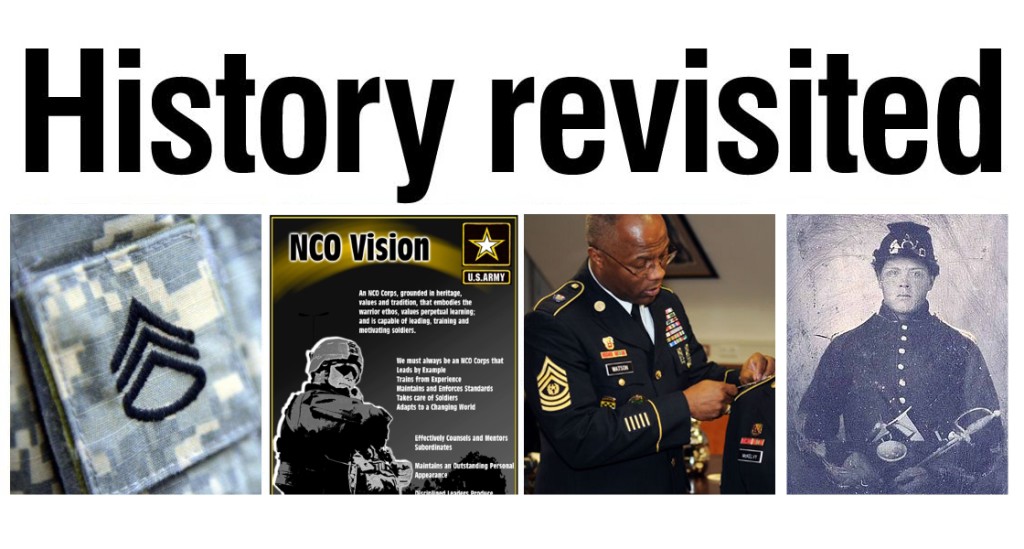 The only lesson of history is that men never learn anything from history.
-George Hegel.

This is a reprint of my Winter 2000-2001 article on the state of affairs concerning proposed changes to the semi-centralized promotion system, and some historically significant data points that reinforced assertions. It also highlights how we got to where we were (at the time). Though it initially caused a stir, the debate was short-lived as the tragic events of Sept. 11, 2011 caused Army leaders to face much tougher challenges. I introduce this again to readers who likely never read those concerns and predictions.

In the past several years promotions to sergeant and staff sergeant have risen dramatically, due in part to the Change In NCO Structure. Yet the question arises, Are we filling the ranks with unskilled soldiers, and if so, are we going to pay for it in future conflicts? In the opening quote from George Hegel, Gen. John (Black Jack) Pershing learned the hard way during World
War I about unskilled noncommissioned officers.

In the recruiting depots in the United States, inductees were shipped off to Europe as soon as they could be inducted, clothed, equipped and minimally trained. There was no pool of skilled noncommissioned officers to choose from, so they were selected from the ranks. They received little more then basic recruit training and then they joined their units. These forces were considered inexperienced and unsophisticated by the allied forces and suffered high casualties. His force was so untrained that Pershing demanded that more attention be given to training and developing
sergeants. The U.S. forces left behind in Europe after World War II were faced with a similar problem. While units were rapidly demobilizing and returning home, Occupation forces were receiving replacements with little training or combat experience. Noncommissioned officers were selected from the ranks and placed in charge, only to be required to perform the unique duties of an occupying Army. In Vietnam it was the attrition of combat, the tour limit and the separation of noncommissioned officers that took its toll on the NCO Corps. The Army was faced with sending career noncoms back into action sooner or filling the ranks with the most senior private first class or specialist. The Noncommissioned Officer Candidate Course, patterned after the Officer Candidate Course, was developed to train raw recruits to serve as squad and team leaders in Vietnam. Fast forward to today. There has been much pressure on unit leaders to hurry-up and get specialists to the promotion board.

Many bean counters and senior staffers involved in the personnel and promotions arena are pointing the wicked finger of shame on the Army’s senior noncommissioned
officers for failing to recommend deserving soldiers for promotion. I have seen charts and slides comparing installations and their number of eligible versus those recommended to
each other. Want to get an Army leaders interest in a program? Just compare their work performance, not against an established standard, but against their peers (there is no
promotion standard). Lately everybody is singing that we have a new problem with promotions and the units in the field have broken the system for selecting, boarding and promoting young
soldiers to sergeant. In a recent Army Times article, the outgoing Army personnel chief Lt. Gen. David Ohle, claimed, we surely need to fix the system for promotions to sergeant. The same article went on to say that about three years ago the Army was at 50 percent eligible specialists who were on the standing list and today it is a paltry 18 percent. The article also quoted Ohle as assuming the field is creating a higher standard than what is published in the promotion regulations.

Wait a minute and hold on here, people. I know we assign senior noncommissioned officers to the Pentagon to serve as honest brokers for these organizations. It is time for someone to poke a fork in them and get them going. The first question that comes to mind is that if the sergeant promotion system is broke then why is the staff sergeant promotion system not broke? They are the same exact system, the semi-centralized promotion system. They both follow a strict format of select, train, and promote. Soldiers are recommended for promotion by their unit leadership and appear before a board of senior noncommissioned officers. Once recommended for promotion they are then eligible to attend the Primary Leadership Development Course (now WLC, soon to be the Basic Leaders Course, -Dan),  or Basic course for SSGs. After completion of the appropriate course soldiers are eligible to be promoted to the next rank. So why does it work for SSGs, but is broken for SGTs?

We need only look back over those three years and see what has happened to our NCO Corps. A recent attempt at alignments to the NCO end strength occurred as a part of the Change in NCO Structure (CINCOS) in 1998. About 6,700 NCO positions in the Army were downgraded as a cost cutting measure, and like a snowball effect it created leadership hardships and the Army was faced
with a lack of expertise we needed. So in February 1999 the Army bought back over 4,500 of those NCO positions. But from the outset the Army realized it would take time to rebuild those losses. In an April 1999 interview, former Sergeant Major of the Army Robert Hall stated that the good news is the CINCOS buyback means we are going to bring [NCO jobs] back into the
force over the next three or four years; that is how long it’ll take us to promote them. So if the senior enlisted soldier explained from the outset we need time to accomplish this, then why are we trying to rush the process? If my math is correct, CINCOS happened under the same Lt. Gen. Ohles watch who claims we are broken when it comes to promoting sergeants.
Maybe I just havent figured this out yet. The most junior, least trained, and only noncommissioned officer in the chain of command is the sergeant/squad leader. Contrary to popular belief not every person who enters the military is good sergeant material. With the proper coaching, teaching and mentoring a soldier can demonstrate that potential. But when each soldier reaches that potential, it is different. So who better to evaluate that but the unit? A new recruit goes through an evaluation and soldierization process while in Initial Entry Training; a commissioned officer through a service academy, ROTC or OCS; and a warrant officer attends the Warrant Officer Candidate Course. But the noncommissioned officer corps, ours which is unique compared to other countries, has no standardized sergeantization process, other than at the unit, based on that units mission. The Primary Leadership Course comes after the soldier
has been selected and boarded and met the desired results. We have to get them to the board first.

This current promotion process was the result of the Army becoming an all-volunteer force in 1973. After the draft ended the NCO Corps was in shambles. Drugs, tension among the races, the absorption of the Womens Army Corps and retention of quality soldiers was on everybodys mind. But top-notch noncommissioned officers were still around to rebuild our corps. Education and career management systems were built for the enlisted force. Standards were reintroduced to our Army as we got around to rebuilding from within. Leadership and NCO professional development studies and panels were developed and pride was brought back to our Army. It has been 27 years since then and we are without a doubt due a reevaluation of our processes. But to throw
out the baby with the bath water and condemn the very process that has brought us the capable NCO leadership to be admired the world over is a disservice to our Corps, past and present.

SMA George Dunaway’s comments from 1969 still hold true. The way a soldier can improve their chances of promotion is quite simple, he stated, a soldier must seek the responsible jobs and see that his job performance will earn him the desired [results]. Arguably, there are those out in the field who have self imposed higher standards for promotion than required. Without condoning those who may be guilty of this, we as an institution are to blame. We expect our leaders to posses certain skills for our units to be successful. Today NCO leaders are doing more things and making decisions that in years past were left to higher-ranking leaders. Because of personnel shortages NCOs are working one or two levels ahead of their grade and training. The decision a sergeant in Kosovo makes today may potentially be played over and over on CNN tomorrow. It is the responsibility demanded of our senior noncommissioned officers to select and train the best who may
ultimately be faced with these decisions.

The NCO has always been the standards bearer for our Army. We should not let an expected shortage of junior NCOs to cause us to lower our standards. Old soldiers are not the ones who have to live with bad decisions, but the people we leave behind will be left to clean up our mess. Having high expectations for candidates to be promoted to the NCO corps should be considered the right way to maintain a professional corps. Those who do not meet the standards or demonstrate the potential deserve to be counseled face-to-face and told their weaknesses and how to improve.
But it is strange that we only do this for semi-centralized promotions. It would be nice that when a soldier gets passed over for promotion to SFC, MSG or SGM that someone who sat on the board would come back and tell them why they were not selected. But that debate is for another day. Face-to-face counseling by the commander, with chain of command input is the right thing to do.

I agree that we need to fix the sergeant promotion problem, but lets not do so at the expense of a professional noncommissioned officer corps. If we allow young soldiers to be promoted to sergeant
who are not skilled or mature enough yet to handle the inherent responsibility to train our soldiers for war, the price that we pay may be on the battlefields like Pershings force in Europe or in our post-Vietnam days. An unprepared specialist today is an unprepared sergeant tomorrow. It is up to all of us to develop the young soldiers under our charge to be the best soldier, and
potential sergeant, that we possibly can. It is up to the senior noncommissioned officer leadership to trust the units recommendations for promotions. However, that can only occur if the senior Army leadership realizes that you cannot build a sergeant overnight, and by forcing unwilling, unable or untrained soldiers to the promotion board will exacerbate the shortage of sergeants.

In the end we all have the same desire, to be the best Army our nation has to offer when the call comes.